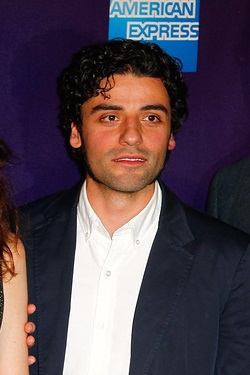 Isaac in 2012, image via Debby Wong/bigstock.com

Oscar Isaac is an American actor and singer. His roles include Inside Llewyn Davis, Show Me a Hero, Ex Machina, and X-Men: Apocalypse, among many other projects.

He was born in Guatemala, as Óscar Isaac Hernández Estrada. Oscar’s father, Oscar Gonzalo Hernández-Cano, is Cuban, and left the country for the U.S. before the Cuban Revolution. Oscar’s mother, María Eugenia Estrada Nicolle, is from Guatemala, where Oscar’s parents met. One of Oscar’s recent maternal ancestors was French. His sister is climate scientist Nicole Hernández-Hammer.

The family settled in the U.S. when Oscar was around five months old, and he was raised in Miami, Florida. Oscar was raised in a religious, Evangelical Christian (Protestant), household.

Oscar is married to Danish film director Elvira Lind, with whom he has two children.

On his mother’s side, Oscar likely is descended from Salvador Estrada Rodríguez and Amelia Nicolle Morales (the daughter of Agustín/Augusto Nicolle and Leonor Morales). Agustín was born in France, the son of Luis Victor Nicolle and Virginia Lavasseur/Lavassur.

Oscar has also stated, “Isaac is Jewish from my father side. I am definitely a big mix of many things,” implying that his father has the surname Isaac in his family tree, and some degree of Jewish heritage from that surname. If this is the case, then the most recent ancestor of Oscar’s that could have been Jewish and surnamed Isaac is Oscar’s paternal great-grandmother, making him of perhaps at most one eighth Jewish ancestry.

Source: Genealogy of Oscar Isaac (focusing on his mother’s side) – https://www.geni.com