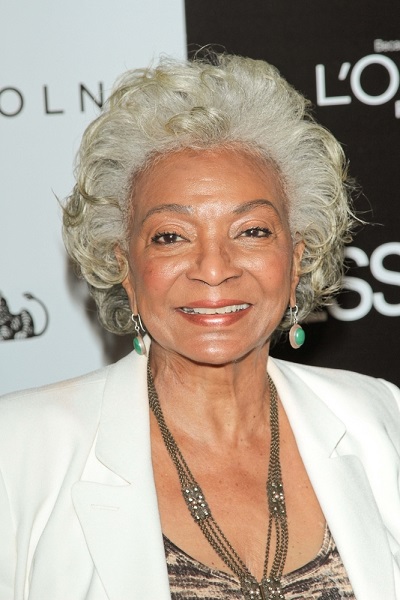 Nichols in 2012, photo by Prphotos.com

Ethnicity: African-American, as well as one eighth Irish

Nichelle Nichols was an American actress, singer, and dancer. She is known for playing Lt. Uhura in the Star Trek universe, a ground-breaking character for African-American women in the 1960s.

She was the daughter of Lishia Mae (Parks) and Samuel Earl Nichols, who was Mayor, and chief magistrate, of Robbins, Illinois, a suburb of Chicago. Her father was born in Missouri, and her mother was from Oklahoma. She had a son, actor Kyle Johnson, with her former husband, dancer Foster Johnson.

Her brother, Thomas, was a member of the Heaven’s Gate cult, and died with the group in 1997.

Nichelle’s paternal grandfather was named Samuel Gillespie Nichols (also known as Samuel Gillespie, the son of James Nichols and Mary N./A.). Samuel was born in Louisiana or Mississippi, to an Irish-born father and an African-American mother.

Nichelle’s paternal grandmother was named Lydia Annie Myers (the daughter of Jacob Myers/Meyers and Blanche). Lydia was born in Mississippi or Louisiana.

Nichelle’s maternal grandfather was Aaron Parks (the son of Henry Parks and Malissa “Lecia” Stinson). Aaron was born in Alabama. Henry was the son of George Parks and Mary Elizabeth “Lizzie” Pasto/Parker.

Nichelle’s maternal grandmother was Minerva Emma Hibbits/Hibbitts (the daughter of Henry Hibbitts and Mary Hale/Hall). Minerva was born in Tennessee.