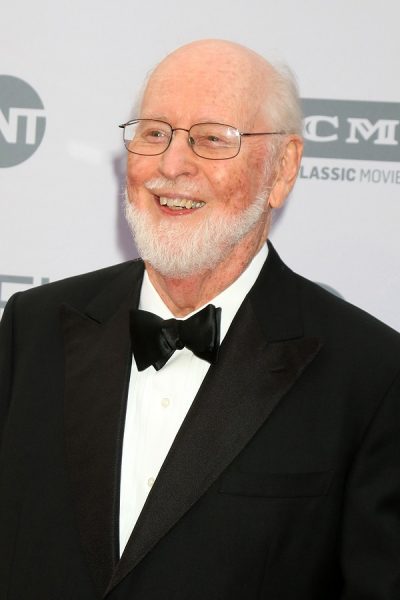 Williams in 2016, photo by kathclick/Bigstock.com

John Williams is an American composer, conductor, pianist, and trombonist. He is known for his iconic scores for films such as Jaws, Star Wars, Indiana Jones, E.T. the Extra-Terrestrial, Home Alone, and Schindler’s List, as well as many others. He has won five Academy Awards for his music.

John is the son of Esther (Towner) and Johnny Williams (John Francis Williams), who was a jazz drummer and percussionist. He played with the Raymond Scott Quintet. His paternal grandparents ran a department store in Bangor, Maine.

John is married to photographer Samantha Winslow. He was previously married to actress and singer Barbara Ruick, until her death. With Barbara, he has three children, including singer, songwriter, and film score composer Joseph Williams, who is the lead singer of rock band Toto.

John’s paternal grandfather was William Edward Williams (the son of William T Williams and Catherine Thornton). John’s grandfather William was born in New York. Catherine was the daughter of Irish parents, Thomas Thornton, who was born in Cashel, Tipperary, and Mary Quinlan.

John’s maternal grandfather was David John/Joseph Towner (the son of David Towner and Emillie Robitaille/Robitalle). John’s great-grandfather David was the son of David Crosby Towner and Philema Stevens. He had Colonial American roots. Emillie was of French-Canadian ancestry. She was born in L’Ancienne-Lorette, Lower Canada (Québec), the daughter of Louis Robitaille and Julie Malvine Côté.

John’s maternal grandmother was Ada Bridget Hennessy/Hennesey/Hennessey (the daughter of John Hennesey and Margaret Fardy). Ada was born on Cardigan, Prince Edward Island. John was the son of John Hennessey and Ann Sigsworth. Margaret was the daughter of Peter Fardy, who was Irish, and of Essee/Esther Moore.

Sources: Genealogy of John Williams (focusing on his mother’s side) – https://www.geni.com