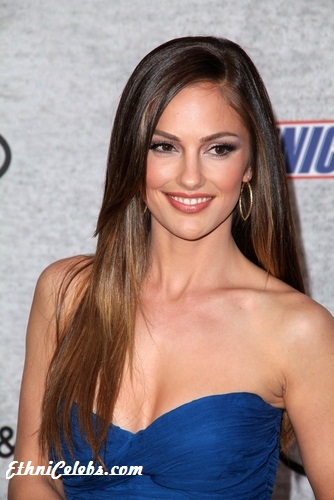 Minka Kelly is an American actress and model. She is known for her roles on the series Friday Night Lights and in the films The Roommate and Just Go with It, among many other projects.

Minka is the daughter of Aerosmith guitarist Rick Dufay and Maureen Kelly, and the granddaughter of actor Richard Ney. Minka’s father has Austrian, German, French, Irish, and English ancestry. Minka’s mother had Irish, English, Scottish, French, Dutch, and German ancestry; Minka likely also has around 1/32 Indonesian ancestry through her mother.

About this, Minka has said:

On the last day of #ImmigrationHeritageMonth, I celebrate the heritage of my own family. My mother[‘]s side is of Dutch Indonesian descent. My father came to New York from France with my grandmother when he was 4. I’m a proud descendant of immigrants and I proudly stand with immigrants.

A picture of Minka with her mother can be seen here.

Minka’s maternal grandfather was Gordon Lee Kelly (the son of Richard Frederick Kelly and Hazel Agnes McDougal). Gordon was born in California, and had Irish, English, and Scottish ancestry. Richard was the son of Frederick D. Kelly and Ida May/Mae Porter. Hazel was the daughter of William T. McDougal and Lucy Maude Stubbs.

Genealogy of Minka’s maternal great-grandmother, Beatrice Aronds (focusing on her own father’s side) – https://www.myheritage.com