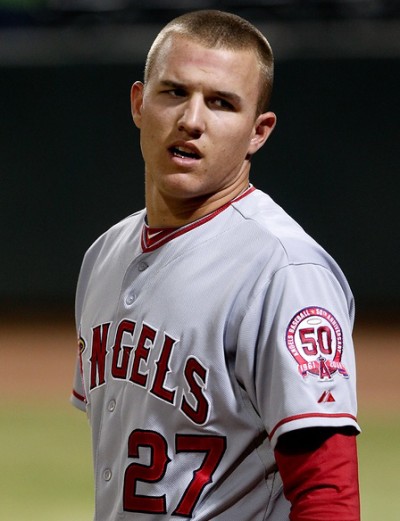 Trout in 2011, photo by Debby Wong/Bigstock.com

Mike Trout, nicknamed “The Millville Meteor,” is an American professional baseball player. He is a center fielder for the Los Angeles Angels of Anaheim of Major League Baseball (MLB).

Mike is the son of Debbie and Jeff Trout. He is married to Jessica Cox, with whom he has a son.

Mike’s patrilineal line can be traced to Jacob Trout, who was born, c. 1801, in New Jersey.

Mike’s paternal grandmother was Phyllis Ash (the daughter of Edward Grover Ash and Helen Rose). Phyllis was born in New Jersey. Edward was the son of Jesse Bennett Ash and Alice Franklin East. Helen was the daughter of Raymond L. Rose and Flora W. Mohr.

Mike’s maternal grandmother was Louise Zerkich (the daughter of John Zerkich and Mary Kovas). Louise was born in Michigan, to Serbian parents. John was the son of Steven Zerkich and Katie Klag.