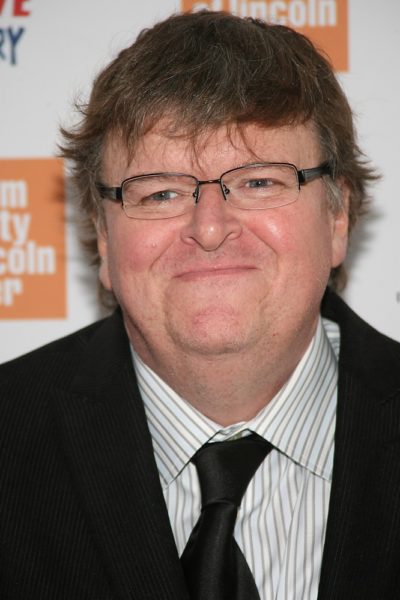 Ethnicity: Irish, with English and Scottish

Michael Moore is an American documentary filmmaker, activist, and author. He is known for his films The Big One, Roger & Me, Bowling for Columbine, and Fahrenheit 9/11, among others.

Michael is the son of Helen Veronica (Wall) and Francis Richard “Frank” Moore, an automotive assembly-line worker. He was raised in a Catholic family. His parents were both of at least half Irish descent, and he also has English and Scottish roots. Part of his mother’s family has lived in United States since the 1600s, and descends from English settlers of that era.

Michael’s paternal grandfather was Herbert Richard “Herb” Moore (the son of Frank A. Moore and Laura/Lura D. Harvey). Herbert was born in Indiana. Frank was the son of Richard Roy Moore and Rachel Jane Peacock. Laura was the daughter of Thomas Harvey and Anna Hoover, who was from a family of Quakers.

Michael’s maternal grandmother was Lois Elizabeth “Bessie” Moore (the daughter of Martin Pemberton Moore and Anna Marie McChristal). Lois was born in Michigan. Martin was the son of Silas Moore and Caroline Pemberton. Anna was born in Canada.

Genealogy of Michael Moore (focusing on his mother’s side) – http://www.geni.com