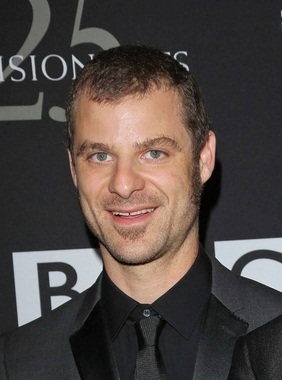 Matt Stone is an American actor, animator, writer, director, producer, singer, and songwriter. He is a co-creator and spearheader of the series South Park, and has also starred in and produced the films Orgazmo and Team America: World Police, all along with his career partner Trey Parker.

Matt is the son of Sheila and Gerald Stone. His parents have the same first names as Kyle Broflovski’s parents on South Park. A surname from his mother’s family, Braslawsky, was the inspiration for Kyle’s surname.

Matt is married to Angela Howard, who was a Comedy Central executive. They have two children. Angela is black.

Matt’s patrilineal line can be traced to Semeon Stone, who was born, c. 1585, in Great Bromley, Essex, England.

Matt’s paternal grandfather was Gerald Whitney Stone (the son of Augustus Jefferson Stone and Katherine/Catherine Anna Neding/Neiding). Gerald was born in Illinois. Augustus was born in Massachusetts, the son of Wesley Preston Stone and Catherine H. “Kate” Whitney. He had deep Colonial American (English) roots. Matt’s great-grandmother Katherine was the daughter of John Neding/Nedvig, who was born in Casbach, Hessen, Germany, and of Anna Maria Christina Gerbracht, whose parents were German, from Darmstadt, Hessen and Oberwegfurth, Vogelsbergkreis, Hessen, respectively.

Matt’s paternal grandmother was Josephine Helen Murphy (the daughter of Michael Henry Murphy and Mary A. Carney). Josephine was born in Illinois, and had Irish ancestry. Michael was the son of Irish parents, Patrick Murphy and Jane Redmond, who was born in Dublin.

Matt’s maternal grandfather was Julius Braslawsky/Belasco (the son of Max Belasko/Balasky/Belasco and Elizabeth/Lizzie Braslawsky/Broslawsky/Berslavsky). Julius was born in Pennsylvania, to Russian Jewish parents. Elizabeth was the daughter of Louis Braslawsky/Braslausky and Yetta Dumar.

Matt’s maternal grandmother was Rebecca “Betty” Laboda (the daughter of Albert Laboda and Lena Rosenberg). Rebecca was the daughter of Polish Jewish parents.

Matt is a tenth cousin, once removed, of Trey Parker, through Matt’s paternal, and Trey’s maternal, ancestors Richard Kimball (1595-1675) and Ursula Scott (1597-1660). Such a relationship is common between two people with Colonial American ancestry.

Genealogy of Matt Stone (focusing on his mother’s side) – https://www.geni.com