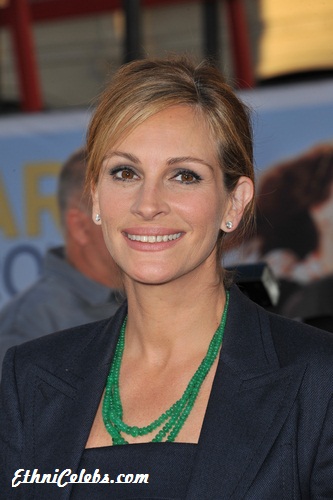 Julia Roberts is an American actress and producer. She won the Academy Award for Best Actress for Erin Brockovich (2000). Julia is also well known for starring in the films Pretty Woman, Erin Brockovich, and Mona Lisa Smile, among many others.

She is the daughter of Betty Lou and Walter Grady Roberts, who were actors and playwrights. She is the sister of actors Eric Roberts (Eric Anthony Roberts) and Lisa Roberts Gillan, and the aunt of actress Emma Roberts, who is Eric’s daughter. Julia is married to cinematographer Daniel Moder, with whom she has three children.

Julia’s paternal grandfather was Walter Thomas “Tom” Roberts (the son of John Pendleton Roberts and Jimmie Glen Corbitt). Walter was born in Georgia. John was the son of Rhoda/Rodie Suttles. Jimmie was the daughter of Thomas C. Corbitt and Josephine “Josie”/Jodie Gherkey/Garker.

Julia’s paternal grandmother was Beatrice M. Beal (the daughter of William Edward Beal and Pearl F. Dooley). Beatrice was born in Georgia. William was the son of John Frank Beal and Martha Ann Redd. Pearl was the daughter of Lewis Washington Dooley and Mahala Ann Hitt.

Julia’s maternal grandfather was Wendell John Bredemus (the son of John Math/Mathias/Matheus/Mathews Bredemus and Elin Maria “Eleanor” Johansdotter/Johnson). Wendell was born in Minnesota. Julia’s great-grandfather John was the son of Mathias/Mathew Bredemus, who was German, and of Elizabeth Steffens/Stevens, who was of German descent. Elin was Swedish, born in By församling, Värmlands län, Sweden, the daughter of Johan/John Jansson/Johnson and Emma Kristina/Christina Carlsdotter/Karlsdotter/Carlson.