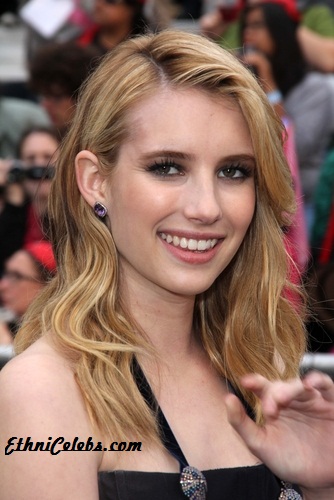 Emma Roberts is an American actress and singer. She is the daughter of actor Eric Roberts (Eric Anthony Roberts) and Kelly Cunningham, and the niece of actresses Julia Roberts and Lisa Roberts Gillan. Her father’s ancestry includes English, German, Swedish, Irish, Scottish, Welsh, and remote French.

Emma has a son with her former partner, actor and model Garrett Hedlund.

Emma’s paternal grandmother was Betty Lou Bredemus (the daughter of Wendell John Bredemus and Elizabeth Ellen Billingsley). Betty was born in Minnesota, and was an actor and playwright. Wendell was the son of John Math/Mathias/Matheus/Mathews Bredemus, who was of German descent, and of Elin Maria “Eleanor” Johansdotter/Johnson, who was born in By församling, Värmlands län, Sweden. Elizabeth was the daughter of James Henry Billingsley and Nellie Hutchings.

Emma’s maternal grandmother is Emma Elizabeth Gailie (the daughter of Anthony/Antone Joseph Gailie and Minnie Van Sickle). Emma’s grandmother Emma was born in New York. Anthony was the son of emigrants from Galicia, Poland, Jan/John Gajli/Gaili/Gailie, from Bochnia, and Elizabeth Rhein, who likely was of German descent. Minnie was the daughter of Harrison Britton Van Sickle and Lillian May Cassidy, and had deep roots in the U.S. She was of Irish, English, German, and Dutch descent.

Sources: Genealogies of Emma Roberts (focusing on her father’s side) – http://www.geni.com
https://www.wikitree.com

Genealogy of Emma’s father (through his own sister, Julia Roberts) – http://freepages.genealogy.rootsweb.ancestry.com