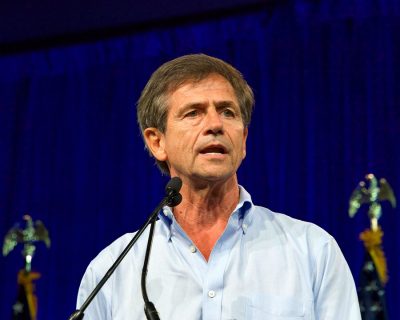 Sestak in 2019, photo by Sheila_F/Bigstock.com

Joe Sestak is an American politician and U.S. Navy officer. As a member of the Democratic Party, he served as a Member of the U.S. House of Representatives from Pennsylvania, from January 3, 2007 to January 3, 2011. He is a Vice Admiral, having retired as a Rear Admiral.

Joe is the son of Kathleen and Joseph Ambrose Sestak. His father was a Slovak immigrant, and his mother is of half German and half Irish descent. Joe is married to Susan L. Clark, who works in environmental, foreign policy, veterans, and other affairs. The couple has a daughter.

Joe’s paternal grandfather was named Martin Sestak. Martin was born in Dolné Lovčice, and came to the U.S. in 1922.

Joe is one of several people of significant Slavic ancestry to have run a plausible or semi-plausible campaign for a major political party’s nomination for President of the United States. Of these candidates, four have won a major party’s caucus and/or primary. The four are:
*Harold Stassen (Republican; in 1944, he won 1 state, Nebraska; in 1948, he won 4 states; in 1952, he won 1 state, Minnesota; Stassen also sought the 1964, 1968, 1976, 1980, 1984, 1988, and 1992 Republican nominations; Stassen’s paternal grandmother was Czech)
*Edmund Muskie (1972; Democratic; won 4 states; Muskie was previously the 1968 Democratic nominee for Vice President of the United States; he was of Polish descent)
*Tom Harkin (1992; Democratic; won 1 state, Iowa; Harkin’s mother was of Slovene descent)
*John Kasich (Republican; ran in 2000 and 2016: in 2016, he won 1 state, Ohio; Kasich is of Czech or Rusyn, and Croatian descent)