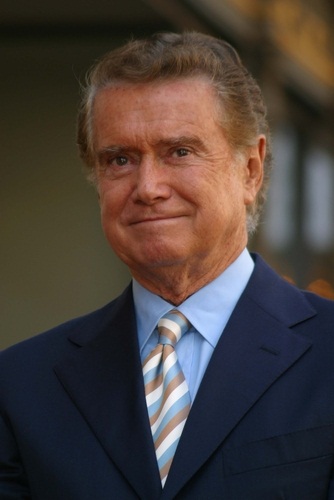 Regis Philbin was an American television presenter, talk show host, game show host, actor, and singer. He was referred to as “the hardest working man in show business.”

He was raised in Van Nest, the Bronx. His father, Francis/Frank Philbin, was of Irish descent, and was a U.S. marine and WWII veteran. His mother, Florence Filomena (Boscia), was born in Manhattan, to an Italian emigrant family, that also had Arbëreshë/Albanian ancestry. They were from Greci, Campania. The Arbëreshë are ethnic Albanians who moved to Italy. It is not clear how much Albanian ancestry Regis had. Regis was named after Regis High School, in Manhattan.

Regis was married to interior decorator Joy (Senese) Philbin, until his death. He had two children with his former wife Catherine “Kay” Faylen, and two children, including producer and writer J. J. Philbin, with Joy. Catherine was the daughter of actor Frank Faylen. J. J. is married to television producer Michael Schur.

Regis’s paternal grandfather was Edward Philbin (the son of Thomas Philbin and Anne O’Brien) Edward was Irish, from either Castlebar, County Mayo, or Northern Ireland.

Regis’s paternal grandmother was named Julia Loretta McNally (the daughter of James McNally and Mary Jane). Julia was born in New York, to an Irish mother.

Through his Arbëreshë ancestry, Regis is a distant (evidently seventh) cousin of musician and television personality Kara DioGuardi. The two discussed their relation on the show Live with Regis and Kelly.