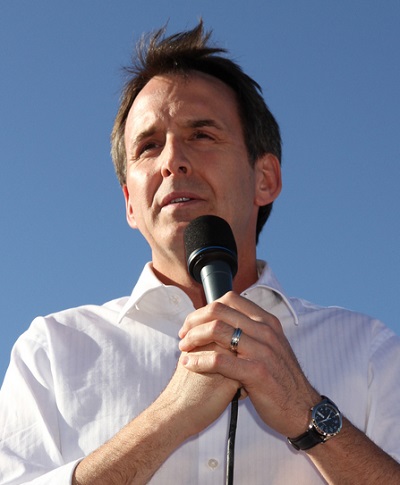 Pawlenty in 2011, photo by PrPhotos

His father, Eugene Joseph Pawlenty, was of Polish descent. His mother, Virginia Frances (Oldenburg), was of German descent. He is married to state court judge Mary Pawlenty, with whom he has two children.

Tim’s paternal grandfather was John Frank Pawlenty (the son of Josef/Joseph Pawlenty and Mary Zoblocki). John was born in Minnesota, to Polish parents.

Tim is one of several people of significant Slavic ancestry to have run a plausible or semi-plausible campaign for a major political party’s nomination for President of the United States. Of these candidates, four have won a major party’s caucus and/or primary. The four are:
*Harold Stassen (Republican; in 1944, he won 1 state, Nebraska; in 1948, he won 4 states; in 1952, he won 1 state, Minnesota; Stassen also sought the 1964, 1968, 1976, 1980, 1984, 1988, and 1992 Republican nominations; Stassen’s paternal grandmother was Czech)
*Edmund Muskie (1972; Democratic; won 4 states; Muskie was previously the 1968 Democratic nominee for Vice President of the United States; he was of Polish descent)
*Tom Harkin (1992; Democratic; won 1 state, Iowa; Harkin’s mother was of Slovene descent)
*John Kasich (Republican; ran in 2000 and 2016: in 2016, he won 1 state, Ohio; Kasich is of Czech or Rusyn, and Croatian descent)