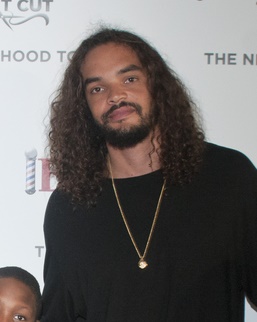 Joakim Noah is an American professional basketball player. He is 6’11.

He is the son of Yannick Noah, a tennis star and musician, and Cécilia Rodhe (born Cécilia Catharina Björnsdotter Rodhe), a model, who was Miss Sweden 1978. His father, who was born in France, is of half Cameroonian and half French descent. His mother is Swedish. Aside from American, Joakim has French, Swedish, and U.S. citizenship. His sister is model Yelena Noah.

Joakim has dubbed himself the African Viking, to pay tribute to his heritage.

Joakim’s paternal grandfather was Zacharie Noah (the son of Simon Noah Bikié and Elisabeth Mekongo). Zacharie was a professional footballer, from Yaoundé, Cameroon. He was of the Ewondo group. Simon was a businessperson.