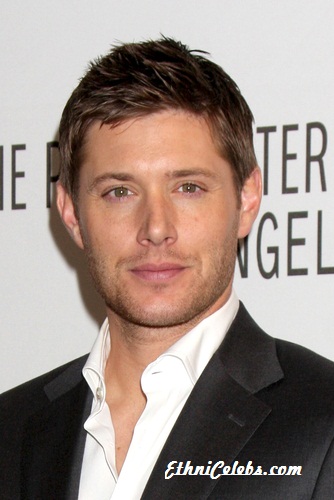 Jensen Ackles is an American actor, singer, producer, and director. He is known for his role on the show Supernatural and in the film My Bloody Valentine 3D.

He is the son of Donna and actor Alan Ackles (Roger Alan Ackles). Jensen is married to actress and model Danneel Ackles (previously Danneel Harris), with whom he has three children.

Jensen has German, English, and smaller amounts of Scottish and Irish, ancestry. Many of his ethnic German ancestors lived in Russia/Ukraine.

Jensen’s paternal grandmother was Dorothy Nell McNatt (the daughter of Floyd McNatt and Lillian B.). Dorothy was born in Texas. Floyd was the son of William John McNatt.

Jensen’s maternal grandfather was Carroll Logan Shaffer (the son of Carroll Shaffer and Della Logan). Jensen’s grandfather Carroll was born in Illinois. Jensen’s great-grandfather Carroll was the son of John Carroll/Charles Shaffer and Virginia M. Conser. Della was the daughter of William Sherman Logan and Adella/Adele May “Della” Engel, whose parents were ethnic Germans, her father from Sarreguemines, Alsace, and her mother from Zweibrucken.

Genealogy of Jensen’s paternal grandfather, Gene Spaulding Ackles (focusing on his own mother’s side) – http://worldconnect.rootsweb.ancestry.com