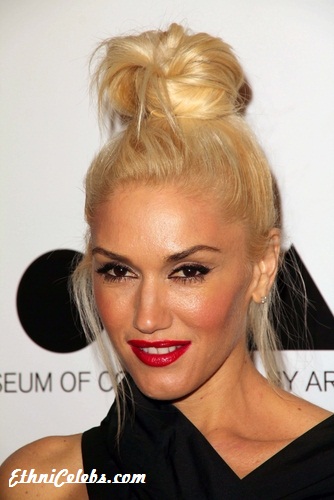 Gwen Stefani is an American singer, songwriter, fashion designer, and actress. She is the co-founder and lead vocalist of the rock band No Doubt. Other members of the band include Tom Dumont and Tony Kanal. She has also been credited as Gwen Shelton.

Gwen is the daughter of Patti (Flynn) and Dennis Stefani. Gwen is married to country singer, songwriter, actor, and television personality Blake Shelton. She has three children with her former husband, singer and actor Gavin Rossdale.

During the 1990s, Gwen’s image paid tribute to Indian culture. She would often wear a Bindi, as infuenced by her ex-boyfriend Tony Kanal, who is of Indian heritage.

Gwen’s paternal grandfather was Vincenzo James Stefani (the son of Antonio Angelo Stefani and Elvira Olivieri). Vincenzo was born in Italy, to a family from Vignanello, Lazio. Elvira was the daughter of Salvatore Olivieri.

Gwen’s paternal grandmother was Margaret Delores DiPaola (the daughter of Francesco “Frank” Di Paola/Dipaola and Libera/Lillie Antonia Marino). Margaret was born in Michigan, to Italian parents. Francesco, a peasant, was born, c. 1885, in Colle Sannita, Province of Benevento, Campania, and was the son of Rocco Di Paola and Maria. Libera was the daughter of George Marino and Mary.

Gwen’s maternal grandfather was William Patrick Flynn (the son of Roger/Robert Patrick Flynn and Gertrude Lucille Waugh). William was born in Texas. Roger was the son of John Aloysius Flynn, who was born in Flintshire, Wales, of Irish descent, with roots in County Mayo; and of Catherine E. Burke, who was also of Irish ancestry. Gertrude was the daughter of William H. Waugh and Sarah/Sallie Corneilla/Cornelia Abraham.

Gwen’s maternal grandmother was Anna/Ann Lorraine Hamilton (the daughter of Raymond George Hamilton and Gladys Adeline/Adleon Colbert). Anna was born in Wisconsin. Raymond was the son of Charles Sumner Hamilton and Mariam Mae Smith. Gladys was the daughter of Fred George Colbert, whose father was English, from Haslingden, Lancashire; and of Anna Sophia Gilseth, whose own parents were Norwegian, from Gilset farm and Bordal farm, both in Storen, Sør-Trøndelag, respectively. Genealogy of Gwen’s father (focusing on his mother’s side) – http://worldconnect.rootsweb.ancestry.com

Information on some of Gwen’s father’s ancestry – https://it-it.facebook.com

Genealogy of Gwen Stefani (focusing on her mother’s side) – http://worldconnect.rootsweb.ancestry.com