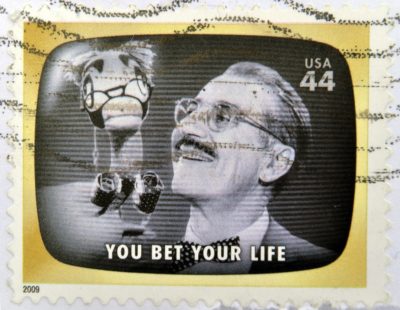 Marx on a stamp c. 2009, photo by Neftali/bigstock.com

Groucho Marx was an American comedian, writer, and star of stage, film, radio, and television. He made 13 feature films with his siblings the Marx Brothers (Harpo Marx and Chico Marx) and also had a successful solo career.

His father, Samuel/Simon Marx, was born in Mertzwiller, Alsace. His mother, Miene/Minnie (Schönberg/Schöenberg), was born in Dornum, Lower Saxony. His uncle (mother’s brother) was comedian and vaudeville performer Al Shean (born Abraham Elieser Adolph Schönberg), half of the comedy team Gallagher and Shean.

Groucho’s maternal grandfather was Levy/Levi/Louis Schönberg/Schöenberg (the son of Abraham Moses Schönberg and Jeanette Schöntje Weiler). Levy was born in Fulkum, Holtgast, Niedersachsen. Abraham was the son of Moses Abraham Israel/Schönberg and Prinzgen Hartog. Jeanette was born in Varel, the daughter of Isaak Weiler and Jette. She later remarried to Gossel Lazarus Funk.

Genealogy of Groucho Marx (focusing on his mother’s side) – https://www.findagrave.com