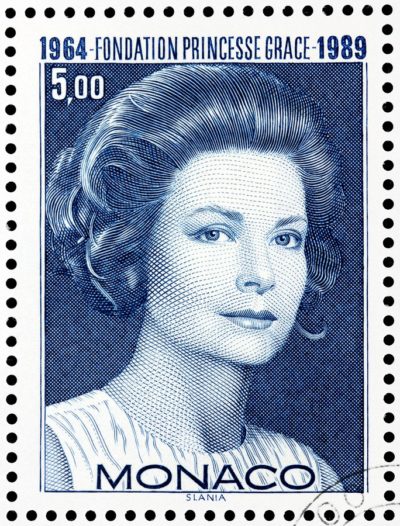 Grace Kelly was a legendary American actress and model. She won the Academy Award for Best Actress for The Country Girl (1954). Grace became known as Princess Grace of Monaco after marrying Prince Rainier III. She was Princess consort of Monaco, from April 18, 1956 until September 14, 1982, when she died in a car accident. She starred in eleven films in total, also including Dial M for Murder, Rear Window, and High Society.

Princess Grace was the daughter of Margaret Katherine (Majer) and John “Jack” Brendan Kelly. Her father had won three Olympic gold medals for rowing. He owned a successful brickwork contracting company, was the Democratic Party nominee in the 1935 Philadelphia Mayoral election, and served on the Fairmount Park Commission and as National Director of Physical Fitness.

Her brother, John B. Kelly, Jr., was also an Olympic rower. She was a niece of Walter C. Kelly, a vaudeville comedian and actor, and George Kelly, a playwright. She had three children, all with Prince Rainier, Caroline, Princess of Hanover, Albert II, Prince of Monaco, and Princess Stéphanie of Monaco. Among her grandchildren are Charlotte Casiraghi and Jazmin Grace Grimaldi.

Princess Grace’s paternal grandfather was John Henry Kelly (the son of Brian/Bernard Kelly and Honora Margaret McLaughlin). John was born in Drumirla, Mayo, County Mayo. Brian was the son of James Patrick Kelly. Honora was the daughter of Michael McLauglin and Mary Burke.

Princess Grace’s maternal grandmother was Margaretha Berg (the daughter of Georg/George Berg and Elisabetha Röhrig). Margaretha was born in Heppenheim, Bergstrasse, Hessen, to a father from Walderlenbach and a mother from Sonderbach. Georg was the son of Johann Georg Berg and Anna Elisabeth Antes. Elisabetha was the daughter of Nicolaus Röhrig and Margaretha Rothermel.

Genealogy of Grace Kelly (focusing on her father’s side) – https://www.wikitree.com