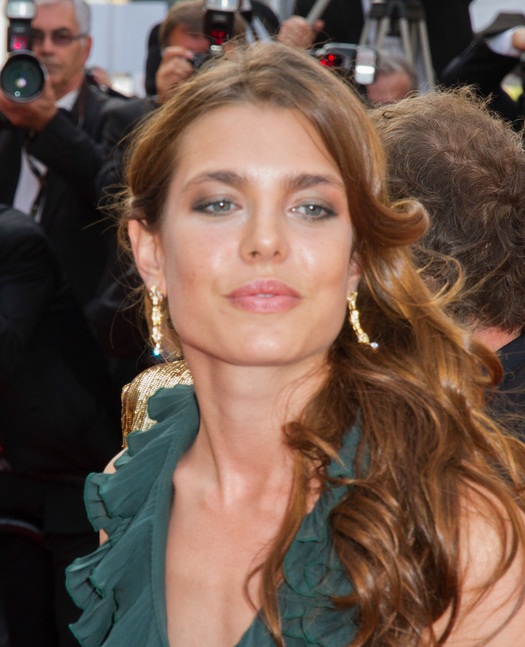 Casiraghi in 2012, photo by PrPhotos

Charlotte Casiraghi is the second child of Caroline, Princess of Hanover, and Stefano Casiraghi, an Italian industrialist. She is fifth in line to the throne of Monaco. She is a niece of Albert II, Prince of Monaco and Princess Stéphanie of Monaco, and a cousin of Jazmin Grace Grimaldi. The House of Grimaldi, who rules over the little Principality since 1287, is of Italian origin from Genoa.

Charlotte is married to film producer Dimitri Rassam. She has a son with her former partner, stand-up comedian and actor Gad Elmaleh; and a son with Dimitri. Dimitri’s mother is actress and fashion model Carole Bouquet.

Charlotte’s maternal grandmother was Grace Kelly, an American actress (born Grace Patricia Kelly, the daughter of John Brendan “Jack” Kelly and Margaret Katherine Majer). Princess Grace was born in Philadelphia, Pennsylvania, U.S. John was the son of Irish emigrants, John Henry Kelly and Mary Ann/Anne Costello, both of Drumirla, near Westport, County Mayo. Margaret was the daughter of Carl Majer/Maier, who was born in Schloss Helmsdorf, Wurttemberg, Germany, and of Margaretha Berg, who was born in Heppenheim, Germany.

Genealogy of Charlotte’s mother (through her own brother) – https://www.wikitree.com

Genealogy of Charlotte’s mother (focusing on her own mother’s side) – http://worldconnect.rootsweb.ancestry.com