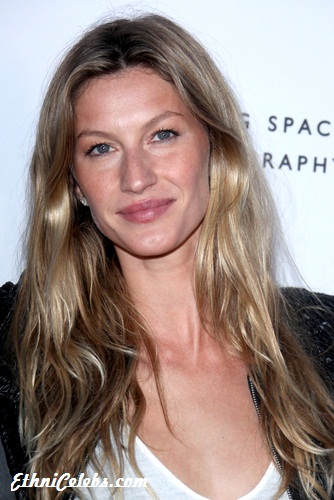 Gisele’s paternal grandfather was Walter Bündchen (the son of Reinoldo/Reinaldo Bündchen and Elsa Irena Hauschildt). Walter was born on March 15, 1926, in Lajeado, Rio Grande do Sul, Brazil. He was Mayor of Horizontina, Rio Grande do Sul, from 1971 to 1975. Horizontina’s airport is named after him. Reinoldo was also born in Rio Grande do Sul, the son of Henrique/Heinrich Bündchen/Bünchen, whose parents were German, from Rheinland-Palatinate, and of Rosaline Schwambach, who was the daughter of Jakob/Jacob Schwambach/Schvambach and Margaretha/Margarida Walber. Gisele’s great-grandmother Elsa was born in Rio Grande do Sul, the daughter of Johann/Joahnn “João” Hauschildt/Hauschild and Karolina/Carolina Hermann/Herrmann, who were also of German descent.

Gisele’s paternal grandmother was Lucila Lückemeyer/Lückmeyer (the daughter of Vicente Lückmeyer and Emilia Horst). Lucila was born in Tuparendi, Rio Grande do Sul, Brazil. Vicente was the son of German parents, Anton Lükemeier/Lückemeier, from North Rhine-Westphalia, and Guilhermina/Wilhelmine Emilie Friederike Borchardt, from Cochem-Zell. Emilia was likely also of German descent.