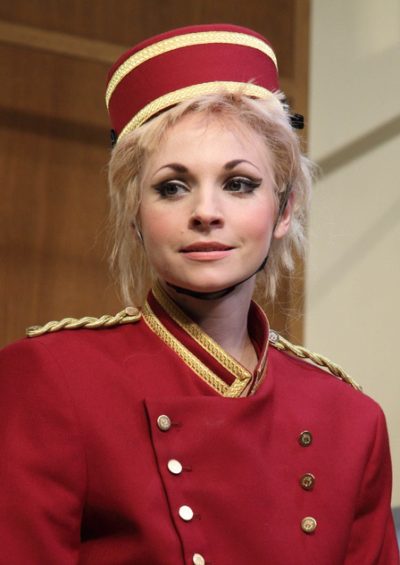 Georgia Tennant, also known as Georgia Moffett, is an English actress and producer. She is known for her roles on British television, including The Bill, Doctor Who, and Merlin.

She is the daughter of actors Sandra Dickinson (born Sandra Searles) and Peter Davison (Peter Malcolm Gordon Moffett). Georgia is married to Scottish actor David Tennant, with whom she has five children. Both her father and husband have played Doctor Who.

Georgia’s paternal grandfather was Claude Neville Gordon Moffett (the son of Donald Moffett and Ivy Harris). Claude was born in Georgetown, British Guiana, now Guyana, and was said to have been of part African-Guyanese descent. He was a radio engineer and grocer. Claude had a grandmother named Louise.

Georgia’s paternal grandmother was named Sheila Kathleen Hallett (the daughter of Herbert Hallett and Isabel/Isobel). Sheila was born in Kasauli, India, to parents from Portsmouth, England, while her own father was garrisoned in India. She returned to England at three years old. She worked in intelligence during WWII.

Georgia’s maternal grandfather was Harold Searles (born Harold Frederic Searles, the son of Clarence Howard Searles and Cora E. Holbert). Harold was born in Hancock, New York, and was a psychoanalyst, who was one of the pioneers of psychiatric medicine. Clarence was the son of Felix Searles, who was Cornish, and of Mary A. Tarbox, whose mother was English. Cora was the daughter of Fred R. Holbert and Minnie Sheldon.

Georgia’s maternal grandmother was named Sylvia/Sulvii Manninen (the daughter of Venner/Werner Manninen and Mandi). Sylvia was born in New Hampshire, to Finnish parents.

Sources: Is There Life Outside the Box?: An Actor Despairs, 2016, autobiography, by Peter Davison