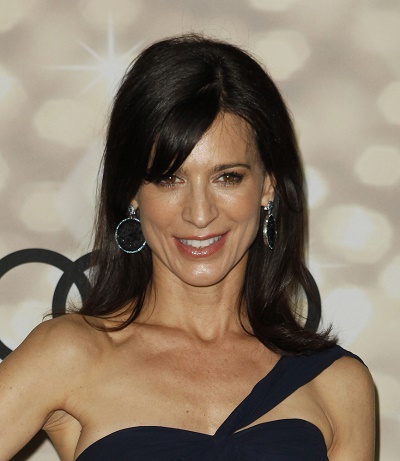 Perrey Reeves is an American actress. She is known for her roles in Child’s Play 3 and, as Mrs. Ari, in Entourage.

Perrey was raised in the New Hampshire countryside by academic parents. Her family did not own a television.

She is married to tennis coach Aaron Fox, with whom she has a daughter.

Perrey’s paternal grandfather was Hazard E. Reeves (Hazard Earle Reeves, Jr., the son of Hazard Earle Reeves and Susan Perreyclear). Perrey’s grandfather Hazard was born in Maryland, to parents from South Carolina. He was a pioneer in sound, and in sound electronics, who contributed magnetic stereophonic sound to films, and was a president of Cinerama Inc. Perrey’s great-grandmother Susan was the daughter of William Henry Perreyclear/Perryclear and Martha Brunson.

Perrey’s maternal grandmother was Mary Adelaide Hughes (the daughter of James Hurd Hughes and Caroline Taylor). Mary was born in Delaware. Perrey’s great-grandfather James H. Hughes was a politician, who served as Delaware Secretary of State, from 1897 to 1901, and as a U.S. Senator from Delaware, from January 3, 1937 to January 3, 1943, as a Democrat. His home, Wheel of Fortune, located near Leipsic, Delaware, was added to the National Register of Historic Places in 1973. James was the son of Ebenezer Hughes and Rebecca Hurd. Caroline was the daughter of Henry B. Taylor and Adelaide Jaques Upham.

Perrey’s matrilineal line can be traced back to Elinor Brantnon, who lived in the mid 1600s in Breach, England.

Sources: Genealogy of Perrey Reeves (focusing on her father’s side) – https://www.geni.com

Genealogy of Perrey Reeves (focusing on her mother’s side) – http://www.genealogy.com

Genealogy of Perrey’s mother (focusing on her own father’s side) – http://worldconnect.rootsweb.ancestry.com