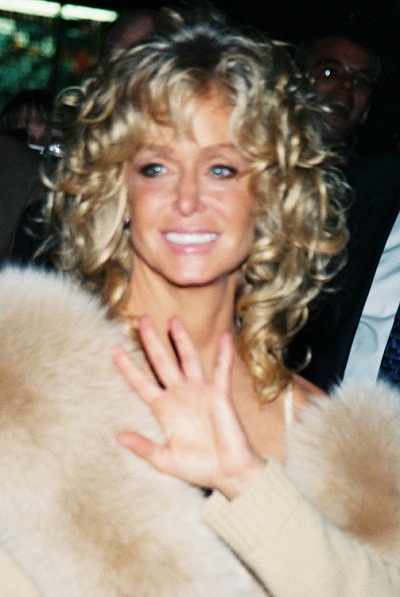 Farrah Fawcett was an American actress, model, and artist. She is known for her roles on the show Charlie’s Angels and in the films Extremities, The Apostle, and Logan’s Run, among other works. She was also credited as Farrah Fawcett-Majors, while married to actor Lee Majors, and Farrah Faucet.

Farrah was the daughter of Pauline Alice (Evans) and James William Fawcett. She had English, and likely some Welsh and Scottish, ancestry. She is sometimes described as having had French or Choctaw Native American ancestry. It is not clear if these said ancestral lines have been verified/documented.

Farrah is also sometimes stated as having had Lebanese ancestry, perhaps because her first name is of Arabic origin. However, she was not of Arab descent.

Until her death, her long-time partner was actor Ryan O’Neal. The couple had a son, Redmond.

Farrah’s maternal grandmother was Martha/Mattie Ann Johnson (the daughter of Robert Owen Johnson and Nancy Jane “Jennie” Mefford). Martha was born in Kentucky. Robert was the son of William Johnson and Mary Elizabeth Miller. Nancy was likely the daughter of John Quincy Mefford and Priscilla/Pricey/Pricy Harmon.

Genealogy of Farraw Fawcett (focusing on her father’s side) – http://worldconnect.rootsweb.ancestry.com

Genealogy of Farrah’s maternal grandmother, Martha/Mattie Ann Johnson (focusing on her own father’s side) – http://worldconnect.rootsweb.ancestry.com