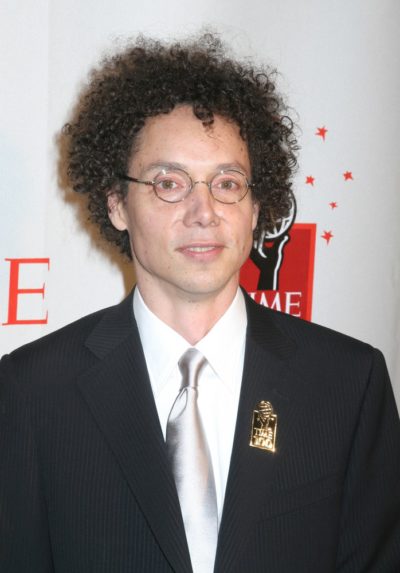 Gladwell in 2006, photo by Prphotos.com

Malcolm was born in Gosport, Hampshire, England, the son of Joyce Eugenie (Nation), a writer and psychotherapist, and Graham Maurice Leslie Gladwell, a mathematician and professor of civil engineering. His father was English (and white), from Otford. His mother was Jamaican (and black), from Harewood. When he was six, his family moved to Canada, settling in Elmira, Ontario.

Malcolm’s patrilineal ancestry can be traced to Joseph Gladwell, who was born, c. 1660, in Suffolk, England.

Malcolm’s maternal grandfather was Donald Balfour Hyslop Nation (the son of William Nation). Donald was born in Saint Catherine. One of Donald’s grandmothers was named Martha Levy. While Levy is often a Jewish surname, Malcolm’s Levy line is non-Jewish going back to at least his great-great-great-great-grandfather. Malcolm’s grandfather’s line includes slave owners who were black.

A DNA test taken by the show Faces of America (2010) stated that Malcolm’s genetic ancestry is:

In his 2010 book about the show, Faces of America: How 12 Extraordinary People Discovered their Pasts, Henry Louis Gates, Jr. wrote that Malcolm’s African roots likely come from the Deshava Province of the Democratic Republic of Congo, the Igbo people of eastern Nigeria, and the Akan people of Ghana.

Genealogy of Malcolm Gladwell (focusing on his mother’s side) – https://www.geni.com