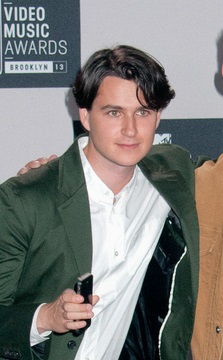 Ezra Koenig is an American musician, singer, songwriter, screenwriter, and radio personality. He is the lead singer and guitarist for the band Vampire Weekend.

Ezra is the son of Bobby Bass, a psychotherapist, and Robin Koenig, a television and film set dresser. Ezra’s parents are both Jewish, and he had a Bar Mitzvah ceremony.

He has a son with his partner, actress and writer Rashida Jones.

Ezra’s maternal grandfather was Allan A. Bass (the son of Isaac Bass/Basowitz and Dora Tanzman/Tansman). Allan was born in New York, to Jewish parents from Minsk, Belarus.