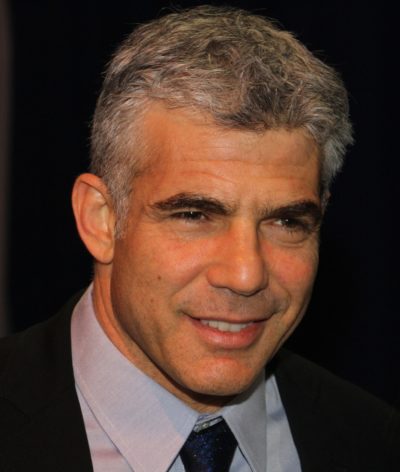 Yair is the son of Shulamit Lapid, a novelist and playwright, and Tommy Lapid, a radio and television presenter, playwright, journalist, politician, and government minister.

Yair’s father was born in Novi Sad, Serbia (then Kingdom of Yugoslavia), to a Hungarian Jewish family; Yair’s paternal grandfather was killed by the Nazis in 1945. The family moved to Israel in 1948. Yair’s mother was born in Tel Aviv. Yair grew up there, and in London.

Yair is married to journalist Lihi Lapid. He has a son with his former wife Tamar Friedman, and two children with Lihi.

Yair’s maternal grandfather was Yechiel David Gilaadi (the son of R’ Shlomo Zalman Klein, A.B.D. Szilagy-Cseh, and of Feiga Schwartz). David was born in Transylvania, and was a journalist, novelist, and translator, who co-founded the newspaper Maariv. Shlomo was born in Oradea, Municipiul Oradea, Județul Bihor, Romania, the son of Rabbi Moshe Martin Klein, A.B.D. Szilágycseh (Cehu Silvaniei), and of Sarah Sheindel Deutsch. Feiga was the daughter of Yekusiel Schwartz.

One of Yair’s great-grandmothers, Hermione Lampel, was arrested in Serbia during World War II. She was killed in a gas chamber in Auschwitz.