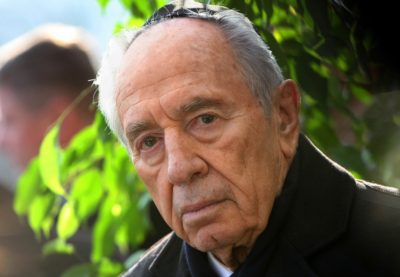 Peres in 2011, photo by Mik_photo/Bigstock.com

He was awarded the Nobel Prize for Peace in 1994, with Yitzhak Rabin and Yasser Arafat.

Prime Minister Peres was born in Wiszniew, Poland (now Belarus), the son of Sara/Sarah (Meltzer) and Yitzhak Gecel/Gitzl Persky/Perski. His father moved to Mandatory Palestine in 1932. The family followed him there in 1934. He was married to Sonya Gelman, until her death. The couple had three children.

Through his father, Prime Minister Peres was a relative of American actress Lauren Bacall, who was born Betty Joan Perske (though he had said that they were not first cousins, as has sometimes been reported).

Prime Minister Peres’ paternal grandfather was Zalman Meir Perski (the son of Yehuda Avraham Perski and Elke). Zalman was born in Vilnius, Lithuania. Yehuda was the son of Hirsch Perski.

Prime Minister Peres’ maternal grandfather was Rabbi Zvi Hirshl Melzer (the son of Moshe Melzer/Meltzer and Mariashka Saladeiche). Rabbi Zvi was murdered in the Holocaust, in 1942. He was an Orthodox rabbi. Moshe was the son of Shara.

Prime Minister Peres’ maternal grandmother was Rivka Alte Potashnik Gurevich. Rivka was born in Vishnevo, and was murdered in the Holocaust, in 1942. One of the Prime Minister’s maternal great-great-grandfathers was Chaim ben Yitzchok of Volozhin, an Orthodox rabbi and Talmudist.