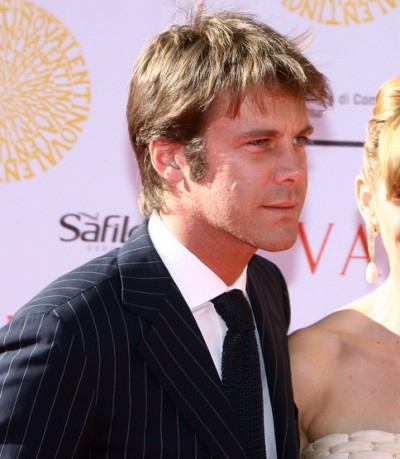 Emanuele Filiberto of Savoy, Prince of Venice is a member of the House of Savoy. He is the only male-line grandson of Umberto II, the last King of Italy.

Emanuele Filiberto is the son of Marina, Princess of Naples (born Marina Ricolfi-Doria), and Vittorio Emanuele, Prince of Naples, who has been Head of the House of Savoy (disputed), since 18 March, 1983. He is married to French actress Clotilde Courau, with whom he has two children.

Emanuele Filiberto is a second cousin of King Philippe of Belgium. Both are the great-grandchildren of Albert I of Belgium.

Emanuele Filiberto’s maternal grandfather was René Italo Ricolfi Doria (the son of Marquis Giuseppe Silvio Ricolfi Doria and Victorina Pianzola). René was born in Cologny, Canton of Geneva, Switzerland, and was a Swiss Olympic swimmer and industrialist, who co-founded food and confectionery company Doria. Giuseppe Silvio was the son of Marquis Francesco Adriano Ricolfi Doria, who was of Italian [Ligurian] descent, and of Countess Éveline de Claparède, who had Swiss-French, French, Swiss-German, and distant Italian, ancestry. One of her ancestors was scientist Jean-Louis Calandrini. Emanuele Filiberto’s great-grandmother Victorina was the daughter of Luigi Pianzola and Luisa Visconti.

Emanuele Filiberto’s maternal grandmother was Iris Amalia Benvenuti (the daughter of Eugenio Benvenuti and Anna Ferrari). Iris was born in Pallanza, Verbania, Piedmont, Italy, and was an owner of Doria. Eugenio was the son of Augusto Benvenuti and Marina Preziosi. Anna was the daughter of Antonio Ferrari and Luisa Gazzelli.