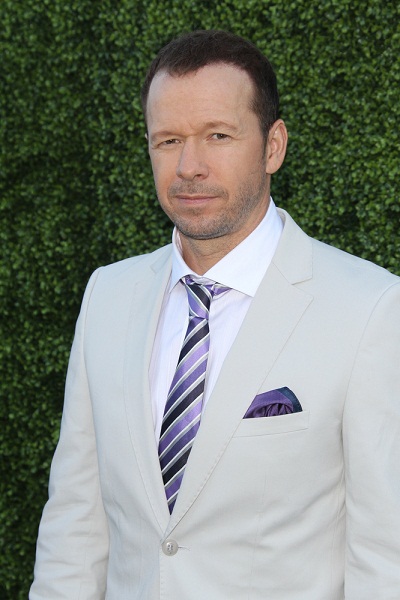 Wahlberg in 2010, photo by Prphotos

Donnie Wahlberg is an American actor, musician, and producer. He is a member of the band New Kids on the Block, along with Jonathan Knight, Jordan Knight, Joey McIntyre, and Danny Wood.

Donnie’s father, Donald Edward Wahlberg, was of half Swedish and half Irish ancestry. Donnie’s mother, Alma Elaine (Donnelly), was of 11/16ths Irish, one eighth French-Canadian, one eighth English, and 1/16th Scottish, ancestry. One of Donnie’s first ancestors in America was William Hathorne, who emigrated from Berkshire, England to Salem, Massachusetts.

One of his siblings is actor Mark Wahlberg. Donnie is married to actress, model, and television personality Jenny McCarthy. He has two children with his former wife Kimberly Fey. Among his nephews are actors Jeff Wahlberg and Oscar Wahlberg.

Donnie’s paternal grandmother was Mary Madeline Bradley (the daughter of Dennis J. Bradley and Sarah A. Doherty). Mary Madeline was born in Boston, Massachusetts. Dennis was born in Boston, the son of John Bradley and Bridget Reddin/Redding, who were Irish immigrants. Sarah was an Irish emigrant, born in Donegal, the daughter of Henry Doherty and Bridget Grant.

Donnie’s maternal grandfather was Arthur Ambrose Donnelly (the son of Walter John Donnelly and Sarah Agnes Duffy). Arthur was born in Boston, Massachusetts, to parents who were born in St. John, New Brunswick, Canada, and who both had Irish ancestry. Walter was the son of Patrick Donnelly and Margaret Campbell. Sarah was the daughter of John Duffy and Sarah McNeil, whose own father was Scottish, born on the Isle of Tyree, Argyll, Scotland.

Donnie’s maternal grandmother was Leone Floyd Brisbois (the daughter of Edward Brisbois and Ellen Floyd “Nellie” McKittrick). Leone was born in Malden, Middlesex, Massachusetts. Edward was born in Winchester, Ontario, Canada, the son of Ludger “Roger” Brisbois/Brisebois, who was French-Canadian, with roots in Québec, and of Jane Delameter, who was of Irish descent. Ellen was born in Wilmington, Massachusetts, the daughter of George W. McKittrick, who was of Irish descent, and of Alma Elizabeth Taylor, who was of Colonial American, English, ancestry.

Donnie’s matrilineal line can be traced to Anna/Ann Hathorne, who was born, c. 1643, in Salem, Massachusetts.