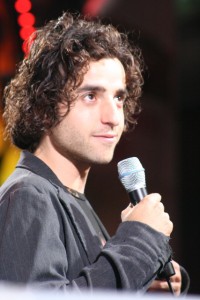 David Krumholtz is an American actor. He is known for his role on the television series Numb3rs. His paternal grandparents were Polish Jewish immigrants. His mother, who is also Jewish, moved from her native Hungary to the U.S. in 1956.

David appeared on a Hungarian television show to talk about Numb3rs series, and spoke a few basic words in Hungarian.

David had a Bar Mitzvah ceremony.

He is married to actress and writer Vanessa Britting, with whom he has two children.

Sources: Interview with David in The Jewish Journal of Greater Los Angeles – http://www.jewishjournal.com

Genealogy of David Krumholtz (focusing on his mother’s side) – https://www.geni.com