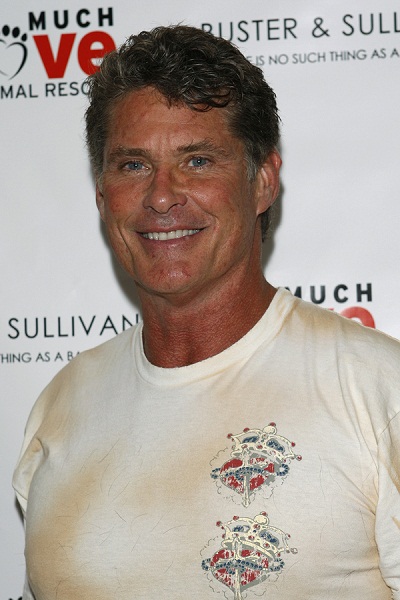 Hasselhoff in 2007, photo by Joe Seer/Bigstock.com

David Hasselhoff is an American actor, singer, producer, and businessperson. He is the star of the television series Knight Rider and Baywatch. David has made a successful singing career in Europe, particularly in Germany.

David is the son of Dolores Therese (Mullinex/Mullinix) and Joseph Vincent Hasselhoff. He has two children, including actress Hayley Hasselhoff, with his former wife, actress Pamela Bach.

David’s paternal grandmother was Myrtle Mary Bateman (the daughter of William James Bateman and Joan/Joana/Jennie Gertrude Cancannon/Concannon). Myrtle was born in Maryland. William was the son of Samuel Bussey Bateman and Vadelia Leonard, who was Irish. Joan was the daughter of Patrick Concannon/Cancannon and Mary, who were also Irish.

David’s maternal grandfather was Winfred Louis Mullinex (the son of George Walter Mullinix and Sadie Elizabeth Henry). Winfred was born in Maryland. George was the son of Upton Mullinix, who may have been born in Bavaria, Germany, and of Jane Wolfe/Wolf.

Genealogy of David Hasselhoff (focusing on his father’s side) – https://www.geni.com