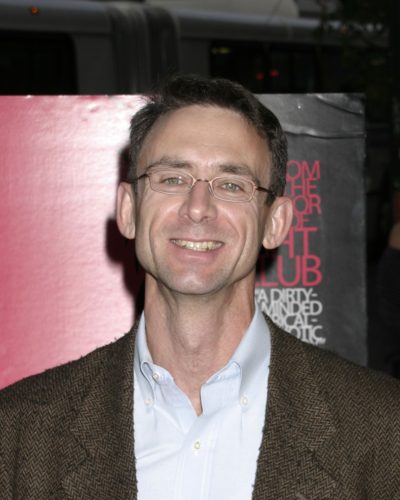 Chuck Palahniuk is an American novelist and journalist. He wrote the novels Fight Club, Choke, Rant, and Invisible Monsters.

Chuck is the son of Carol Adele and Fred Leander Palahniuk. He was raised in Burbank, Washington. Chuck is said to be distantly related to actor and singer Jack Palance.

Chuck’s paternal grandfather was Nick Palahniuk (the son of George Palahniuk and Mary Stuss). Nick was born in Boryshkivtsi, Galicia, Austria-Hungary, into an ethnic Ukrainian family. George was the son of Adam Palahniuk and Nanacian.

Chuck’s paternal grandmother was Pareska Jeromchek (the daughter of Wenzel Jeromchek and Mary Fronchek). Pareska was of Ukrainian ancestry. Wenzel was born in Pisky, Brody, Lviv, the son of Phillip Jaremczuk and Maria Tymczyszyn. Mary was born in Galicia, the daughter of Charles Franchuk and Ann.

Chuck’s maternal grandfather was Joseph James Tallent (the son of Charles Arthur Tallent and Josephine De Kelaer). Joseph was born in Montana. Charles was the son of Edward Tallent, who was English, and of Catherine Cummings, who was Irish. Josephine was the daughter of Belgian parents, Frank De Kelaer/De Keliar and Mary Vincent.

Chuck’s maternal grandmother was Ruth Adel/Adele Remillard (the daughter of Edward Stephen “Steve” Remillard and Lou White). Ruth was born in Montana. Edward was the son of Edward Remillard, who was French-Canadian, and of Asylda Benjamin, whose parents were Canadian. Lou was the daughter of Orrin Arthur White and Harriet Eva Reniff.