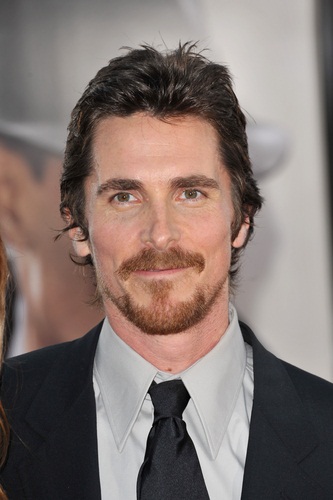 Christian Bale is an English actor. He won the Academy Award for Best Supporting Actor for The Fighter (2010). He is also known for his roles in the films Empire of the Sun, American Psycho, the 2005-2012 Batman series, American Hustle, The Big Short, and Vice, among many others.

Christian was born in Haverfordwest, Pembrokeshire, Wales, and was raised in England, in Surrey and Dorset, and Portugal, among other places. He is now also a U.S. citizen.

His father, David Charles Howard Bale, an entrepreneur, was born in South Africa, and had English, and distant Channel Islander (Guernsey) and German, ancestry. His mother, Jennifer “Jenny” (James), is English. While Christian is often described as a “Welsh actor,” it is not clear if he has any Welsh ancestry. Among Christian’s siblings is director and actress Louise Bale.

Christian is married to actress, model, and make-up artist Sibi Blazic, with whom he has two children. David’s father was married to American activist Gloria Steinem until his death.

Christian’s patrilineal ancestry can be traced to his great-great-grandfather, John Bale, who was born, c. 1811, in Stoke, Devonshire, England.

Sources: Christian says that he is English rather than Welsh – http://www.youtube.com

Genealogies of Christian Bale (focusing on his father’s side) – http://www.wikitree.com
https://www.geni.com