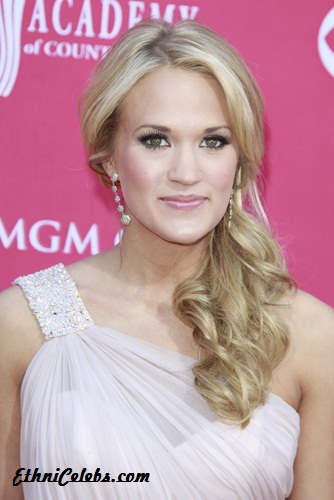 Carrie Underwood is an American country music singer, songwriter, and actress. She won the fourth season of the show American Idol (in 2005). See other American Idol winners here.

Carrie was born in Muskogee, Oklahoma, and was raised in Checotah, Oklahoma.

Carrie is married to Canadian-born hockey player Mike Fisher, with whom she has two children.

Asked about having Scottish ancestry, she said:

That’s on my Wikipedia and I don’t know why. Someone keeps putting it up there. According to that page I’m also a member of a Native American tribe… We keep changing it and they keep changing it back: they’re adamant I’m Scottish… I mean, I could be. My dad recently told me that my great-great-grandfather was born in Ireland.

Carrie’s paternal grandfather was Bryan Gladys Underwood (the son of Harmon H. Underwood and Myrtle Higgins). Bryan was born in Oklahoma. Harmon was the son of James Gideon Underwood and Eliza Jane Allen. Myrtle was the daughter of William W. Higgins and Elizabeth Corbett.

Carrie’s paternal grandmother was Nell Ella Green (the daughter of William Henry Green and Susan Estelle Spicer). Nell was born in Oklahoma. Susan was the daughter of Louis Spicer and Palmyra McCullar.

Carrie’s maternal grandfather was William Carl Shatswell (the son of Lester B. Shatswell and Rosie E. Needham). William was born in Oklahoma. Lester was the son of George Riley Shatswell and Sarah Emeline/Emmaline Pierce. Rosie was the daughter of Ira Andrew Needham and Bertha M. Spencer.

Carrie’s maternal grandmother was Gladys Faye Luke (the daughter of Stanton M. Luke and Adeline Gillespie). Gladys was born in Oklahoma. Stanton was the son of Thomas K. Luke and Nancy Jane Whisenhunt.