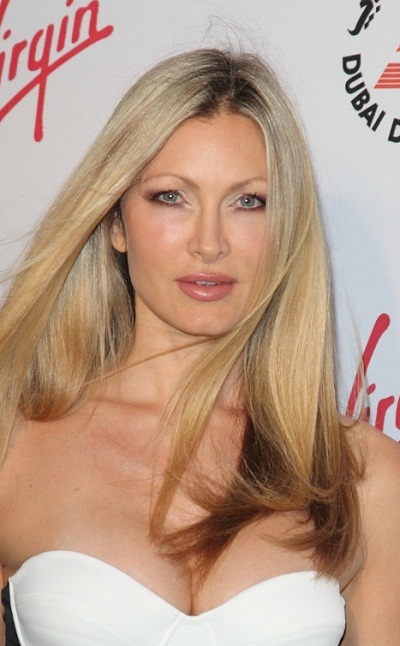 Bourret in 2012, photo by prphotos.com

Caprice Bourret is an American businessperson, model, actress, and television personality. She runs the company, By Caprice, which sells lingerie and bedding ranges. Caprice lives in the U.K. A picture of Caprice with her sister, mother, and maternal grandmother can be seen here. She is married to Ty Comfort, with whom she has two children.

Caprice is a practicing Jew. It is not clear if she is of Jewish heritage, but she has said that she was raised Jewish.

Caprice’s paternal grandfather was Robert Harold Bourret/Bourett (the son of Lawrence/Laurence Raphael Bourett and Ruth Heitzman/Heitzmann). Robert was born in Iowa. Lawrence was born in South Dakota, the son of William Lewis Bourett/Boret, who was of French-Canadian and Welsh parentage, and of Martha Pachents/Patience Benton, who had English and Scottish ancestry. Ruth was the daughter of Andrew Jackson Heitzman, whose parents were Alsatian Germans, and of Mary Elizabeth “Lizzie” Crumrine, who was also of German origin.

Caprice’s paternal grandmother was Doris Mae Kutil (the daughter of Frank Albert Kutil and Gunda Theodora/Dora Abelson/Abelsen). Doris was born in Iowa. Frank was the son of Stephen Kutil and Mary Villin, who were of Bohemian Czech origin. Gunda was the daughter of Norwegian parents, Peder Mandius Abelsen/Abelson and Tea/Thea Josefine Tønnesdtr/Tonneson/Thompson, who was from Hananger Vanse.

Caprice’s maternal grandfather was Richard James Pion (the son of George Frank Pion and Anna Adela/Adele/Adella Chatel). Richard was born in California. George was French-Canadian, born in Manitoba, and was the son of Joseph Pion and Alexina Chartier. Anna was born in Michigan, of French-Canadian descent, and was the daughter of Clovis Edouard Chatel and Medrise/Julie Remillard.

Genealogy of Caprice’s paternal grandmother, Doris Mae Kutil (focusing on her own mother’s side) – http://www.hellesland.com