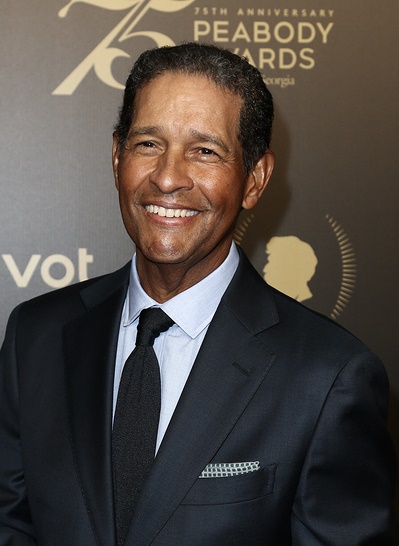 Gumbel in 2016, photo by Debby Wong/Bigstock.com

Bryant Gumbel is an American television journalist and sportscaster.

Bryant is the son of Rhea Alice (LeCesne) and Richard Dunbar Gumbel, Jr. His brother is television sportscaster Greg Gumbel. Bryant is married to Hilary Quinlan. He has two children with his former wife June Baranco.

His parents were both black, of mainly African and French descent. The Gumbel family in Louisiana is of German Jewish origin. Bryant is of approximately 3/32 Ashkenazi Jewish ancestry. He also has distant Corsican Italian, and possibly English, roots. Some of his ancestors lived in Haiti.

A DNA test whose results were displayed on the show Finding Your Roots with Henry Louis Gates, Jr. (2017) stated that Bryant’s genetic ancestry is:

Bryant’s patrilineal ancestry can be traced to Elias Gimpel/Gümbel, who was born, c. 1776, in Framersheim, Hessen, Germany, and to his wife, Kaye Hirsch.

Bryant’s paternal grandfather was Richard Dunbar Gumbel (the son of Cornelius Joseph “Jack” Gumbel and Marie Valentine Allain/Allen Prevost). Richard was born in New Orleans, Louisiana. He was a founder-member of the city’s Autocrat Club. Bryant’s great-grandfather Cornelius was born in Lakeland, Pointe Coupee, Louisiana, the son of Karl/Cornelius/Carl Gumbel, who was a Jewish emigrant, from Albisheim, Bavaria, and of Angelina/Angelic/Angelica Charamel/Charemel. Bryant’s great-grandmother Marie was the daughter of John Prevost and Marie S. Allain.

Bryant’s maternal grandfather was Adrian/Adrien Bartholomew LeCesne (the son of Albert Joseph LeCesne and Alice Lamotte/Lamothe). Adrian was born in New Orleans, Louisiana. Albert was the son of Gustave Augustin LeCesne and Louise Blanc/Blano; Gustave’s paternal grandfather, Louis-Nicolas LeCesne, was born in France. Alice was the daughter of Martin LaMotte, who was born into slavery, and of Henriette Jaillot. Martin fought for the Confederacy, and later the Union, during the Civil War.

Bryant’s maternal grandmother was Adele G. Gaignard (the daughter of Charles L. Gaignard and Pauline Foster). Adele was born in Louisiana. Charles was the son of Louis Gaignard and Élisabeth Eulalie Warburg. Élisabeth’s father, Bryant’s great-great-great-grandfather Daniel Samuel Warburg, was a German Jew, who was born in Hamburg, Germany.