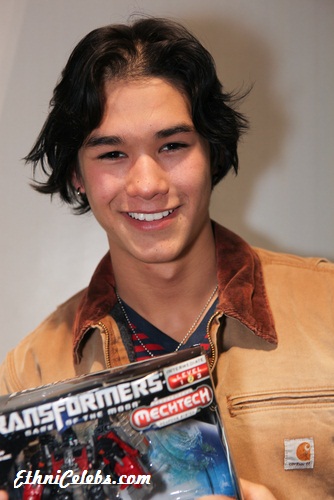 Booboo Stewart, also known as Boo Boo Stewart, is an American actor, singer, dancer, model, and martial artist. He has appeared in the Twilight films as Seth Clearwater, a Native American character. He was a member of the singing group T-Squad.

Booboo is the son of Renee and Nils Allen Stewart, a stuntman and actor. His sister is actress Fivel Stewart.

Booboo’s mother, who is Asian-American, is of Japanese, Chinese, and Korean descent.

Booboo’s maternal grandfather is Lonnie Tokiyoshi Kojima (the son of George Shinobu Kojima and Rose Tokiko Kawana). Lonnie was born in California, as were his parents. The family was of Japanese descent. Lonnie was interned in Cody, Wyoming, as a small child, as part of Japanese-American internment during WWII. Rose was the daughter of Choyiro/Chjiro Kawana and Mitsuyo Morio.

Booboo’s maternal grandmother is Barbara Lynn Ung (who likely was the daughter of Tommy Ung and Ann Chang). Barbara was born in California. Tommy was born in China.