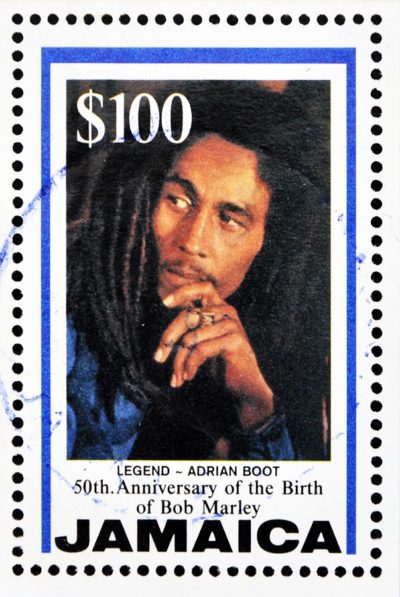 He was the son of Cedella (Malcolm) and Norval Sinclair Marley. His parents were both born in Jamaica, his father in Clarendon. His father was white, and had English ancestry. His mother was black. He was quoted saying:

Me don’t dip on the black man’s side nor the white man’s side. Me dip on God’s side, the one who create me and cause me to come from black and white.

Bob was married to singer Rita Marley (born Alpharita Constantia Anderson), until his death. Bob had eleven children (at least), including musicians Ziggy Marley and Damian Marley, and entrepreneur and football player Rohan Marley. His grandson, Skip Marley, is also a musician.

He was baptized by the Archbishop of the Ethiopian Orthodox Christian Church on November 4, 1980 in Kingston, Jamaica.

Bob’s paternal grandfather was Albert Thomas Marley (the son of Frederick Marley and Hannah Jane Tiltman). Albert was English, born in South Weald, Brentwood, Essex, England, to parents from Rye, Sussex. Frederick was the son of Thomas Marley and Jane Simms/Sims. Hannah was the daughter of Richard Tiltman and Mary Ann Moore.

There are claims on the internet that Bob had some kind of Jewish ancestry, sometimes cited as Syrian Jewish, through his father, or, sometimes, his mother. There is no documented evidence that Bob had Jewish ancestry. The Bloomfield family line from which Bob descended, a famous family in Jamaica, is sometimes cited as having been originally Jewish; this is almost certainly false.