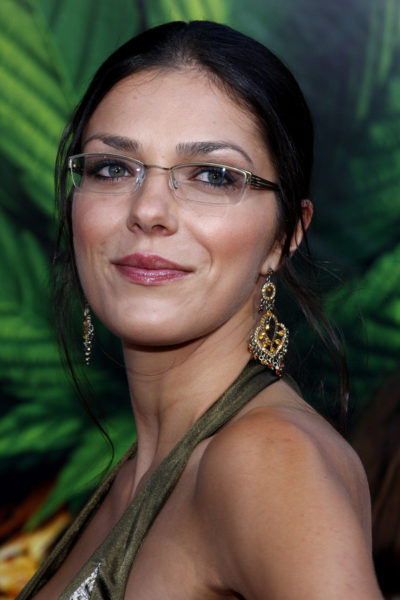 Curry in 2008, photo by Starfrenzy/Bigstock.com

Adrianne Curry is an American fashion model, actress, and television personality. Adrianne is known for being the winner of the first season of America’s Next Top Model.

Adrianne is the daughter of Christine and Richard Curry. She is married to movie trailer-voice actor Matthew Rhode.

Her documented ancestry includes Italian, English, Irish, and Scottish. Adrianne has said that she took a DNA Test (from ancestry.com) which specified her roots as “Viking, Italian, Middle Eastern Asian, with sprinkles of Spanish and Northern Italy, and Romanian Jewish Celt”. Adrianne has also said (here and here) that she has Blackfoot Native American ancestry, although it is not clear if that ancestry has been verified/documented.

Adrianne’s maternal grandfather was Raymond Durrett Glasgow (the son of Vincent Blaine Glasgow and Mary Regina Ryder). Raymond was born in Illinois. Vincent was the son of Daniel Glasgow/Glasco and Retta/Rhetta Brutchey/Britchey. Mary Regina was the daughter of Patrick Ryder and Frances Hendrick.

Adrianne’s maternal grandmother was Anne/Anna Rose Zappia (the daughter of Domenico/Dominico Frank Zappia and Maria/Marie Antonia/Antoinette Cantanzariti). Anne was born in Indiana, to parents who were born in Platì, Calabria, Italy. Domenico was the son of Antonio Zappia and Marianna. Adrianne’s great-grandmother Maria/Marie was the daughter of Domenico/Antonio Catanzariti and Caterina Belle.

Genealogy of Adrianne Curry (focusing on her mother’s side) – https://www.geni.com