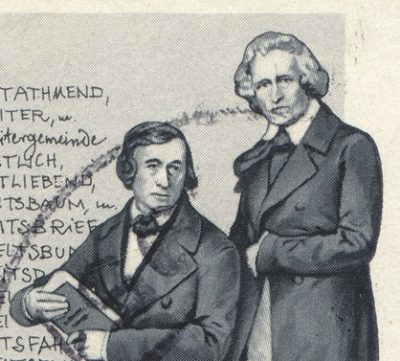 Place of Birth: Hanau, Landgraviate of Hesse-Kassel in the Holy Roman Empire (both)

Place of Death: Berlin, Kingdom of Prussia in the German Confederation (both)

The Brothers Grimm, Jacob Grimm and Wilhelm Grimm, were German academics, philologists, cultural researchers, and lexicographers, known for publishing folklore tales. Jacob was also a jurist and mythologist, and Wilhelm was an author and anthropologist.

The Brothers were the children of Dorothea (Zimmer), from Kassel, Kassel, Hesse, and Philipp Wilhelm Grimm, from Hanau.

Wilhelm was married to Henriette Dorothea Wild, with whom he had four children.

The Brothers’ paternal grandmother was Christiane Elisabeth Heilmann (the daughter of Johann Georg Heilmann and Maria Margaretha Gruner). Christiane was born in Birstein. Johann was the son of Balthasar Heilmann and Anna Magdalena Vigelius.