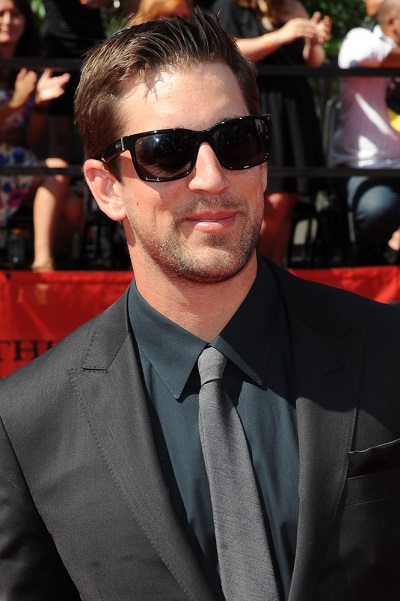 Rodgers in 2011, photo by Prphotos.com

Aaron Rodgers is an American professional football player. He is a quarterback. He was voted Super Bowl MVP for Super Bowl XLV (2011).

Aaron is the son of Darla Leigh (Pittman) and Edward Wesley Rodgers, a chiropractor, who played football as an offensive lineman for the Chico State Wildcats, from 1973 to 1976. His brother is sports commentator and football player Jordan Rodgers. Aaron was partly raised in Ukiah, California, and Beaverton, Oregon.

Aaron’s paternal grandfather was Edward Wesley Rodgers (the son of Alexander John Rodgers and Cora Willetta Larrick). Edward was born in Illinois. Alexander was the son of Archibald Weir Rodgers, who was born in Pennsylvania, to Irish parents, and of Louisa Houseberg, who was German. Cora was the daughter of Edward Wesley Larrick and Susan “Susie” Matilda Schmink.

Aaron’s paternal grandmother was Kathryn Christine “Kay” Odell (the daughter of Harry Barnard Odell and Pearl Nina Hollingsworth). Kathryn was born in Texas. Harry was the son of William Louis Odell and Christina/Christian Staaden. Pearl was the daughter of Mitchell Pettus Hollingsworth and Sula Dale.

Aaron’s maternal grandmother is Barbara A. Blair (the daughter of William Edwin Blair and Edith Myrl Tierney). Barbara was born in California. William was the son of William Blair and Josephine A. “Josie” McTigue. Edith was the daughter of Patrick Jacob Tierney and Minnie Etta Calkins.