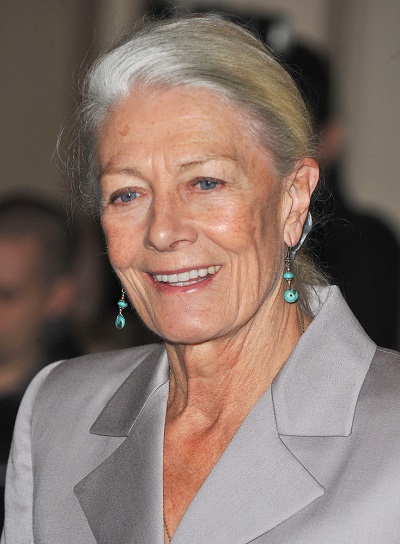 Redgrave in 2009, photo by Prphotos.com

Vanessa Redgrave is an English actress and political activist. She won the Academy Award for Best Supporting Actress for Julia (1977).

She is a sibling of actors Corin Redgrave and Lynn Redgrave. Her parents were actors Michael Redgrave (Michael Scudamore Redgrave) and Rachel Kempson, and her paternal grandparents were actors Roy Redgrave and Margaret Scudamore. She is married to Italian actor Franco Nero. She is the mother of actresses Natasha Richardson (who is deceased) and Joely Richardson, with her first husband, director and producer Tony Richardson; and of screenwriter and filmmaker Carlo Gabriel Nero, with Nero. Her grandson is actor Micheál Richardson.

Vanessa’s maternal grandfather was Eric William Edward Kempson (the son of Frederick Robertson Kempson and Julia Madeleine Jay). Eric was born in Hereford, Herefordshire, England. Frederick was the son of William Brooke Kempson and Elizabeth Robertson. Julia was the daughter of James Jay.

Vanessa’s maternal grandmother was Beatrice Hamilton Ashwell (the daughter of Laurence Thomas Ashwell and Henrietta Maria Kingham). Beatrice was born in Wandsworth, London, England. Laurence was the son of Davis Ashwell and Sarah.