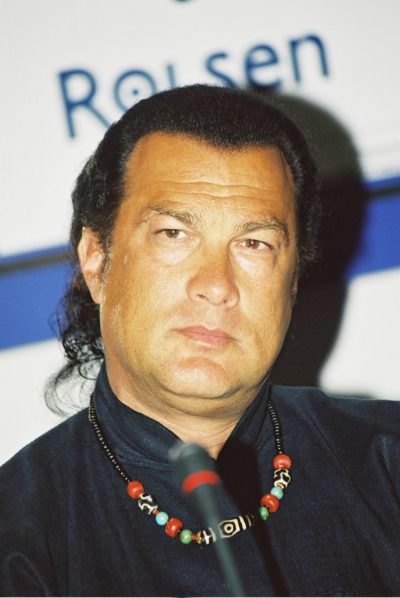 Seagal in 2003, photo by Denis Makarenko/Bigstock.com

Steven Seagal is an American actor, screenwriter, producer, martial artist, and musician. An action star beginning in the late 1980s, his roles include Above the Law, Hard to Kill, Under Siege, and Executive Decision.

Steven was born in Lansing, Michigan, and grew up in Fullerton, California, where he first learned martial arts. He lived in Japan for a number of years, and speaks Japanese fluently. Steven was granted Serbian and Russian citizenship in 2016. He has been appointed Russia’s special envoy to the U.S.

He is married to Erdenetuya Batsukh, who is from Mongolia. Steven is a devout Buddhist. He has two children, actor and model Kentaro Seagal and writer and actress Ayako Fujitani, with his former wife, Japanese-born Miyako Fujitani, who is the daughter of an aikido instructor; three children with his former wife, actress and model Kelly LeBrock; and a son with Erdenetuya.

Steven’s paternal grandfather was named Nathan Seagal (originally Nathan Siegelman, the son of Paul Siegelman and Ida). Nathan was Jewish, and was born in Babruysk, now in Belarus.

Steven’s paternal grandmother was Dora Goldstein (the daughter of Jacob Goldstein and Rachel Geldgesen). Dora was a Russian Jewish immigrant.

Steven is sometimes described as, and/or has described himself as, having Native American and/or Italian ancestry. These claims are not accurate. In one interview with a Russian outlet, Steven stated (see quote below) that his grandfather was either of Kalmyk or Buryat descent. This statement is not accurate. Steven’s grandfather, Nathan Siegelman/Seagal, was a Yiddish-speaking Russian Jewish immigrant.

When the war began in America from Russian Buddhist Republics moved immigrants, and among them was my grandfather. We do not know whether he was a Kalmyk and Buryat… As a child, I just said – “He was a Mongol,” and now there is nobody to ask. Anyone who might know the answer to this question is already gone… Perhaps I Kalmyk. I look like a Kalmyk?

Genealogy of Steven’s mother (focusing on her father’s side) – http://worldconnect.rootsweb.ancestry.com

Russian interview with Steven Seagal, 2007, where he states that he had a Mongolian grandfather – http://savetibet.ru