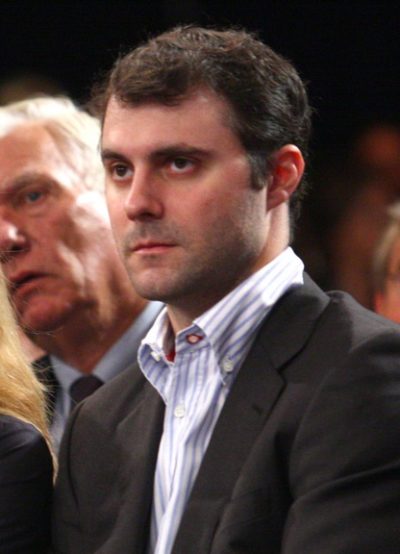 Mezvinsky in 2009, photo by Prphotos

Marc Mezvinsky is an American investment banker. He co-founded the hedge fund Eaglevale Partners. Marc is married to executive Chelsea Clinton, with whom he has three children.

Marc was raised in Conservative Judaism. His family is from Russia, Poland, Germany, and Ukraine.

Marc is in an interfaith marriage with Chelsea, who is Methodist.

Marc’s paternal grandfather was Abraham/Abe Mezvinsky (the son of Nathan Mezvinsky and Yenta Osherenko). Abraham was born in Kiev, Ukraine. Nathan was the son of William Mezvinsky. Yetta was the daughter of Joseph Osherenko.

Marc’s paternal grandmother was Fannie/Fanny Grundman (the daughter of David B. Grundman and Ester Dominitz). Fannie was born in Poland, to a father from Russia and a mother who was born in Sukow, Mecklenburg-West Pommerania, Germany. David was the son of Harry Grundman and Anna.

Marc’s maternal grandfather was Herbert Margolies (the son of Philip Margolies and Mary). Herbert was born in Pennsylvania, to parents from Russia.

Marc’s maternal grandmother was Mildred Harrison (the daughter of Charles R. Harrison and Sadie Sostman). Charles was born in Minnesota, the son of Raphael I. Harrison, who was born in Poland, and of Minnie Peiser, who was born in Hanover, Germany. Sadie was born in Pennsylvania, to parents from Germany, Julius Sostman and Bertha Herzstein, with her father being from Emmerthal, Lower Saxony.

Marc’s matrilineal line can be traced to Amalie Rosenthal, who was born, c. 1790, in Padberg, Marsberg, Germany.

Genealogy of Marc Mezvinsky (focusing on his father’s side) – https://wc.rootsweb.com