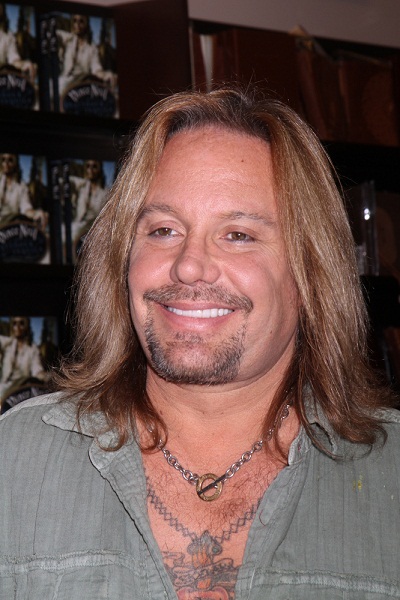 Vince Neil is an American vocalist and musician. He was a member of the band Mötley Crüe, along with Tommy Lee, Mick Mars, and Nikki Sixx.

Vince is the son of Shirley and Clois Wharton.

Vince has a daughter with his former wife, mud wrestler and fashion model Sharise Ruddell.

Vince’s paternal grandfather was Ervin Daniel Wharton (the son of Samuel Stewart Wharton and Idora Gray). Ervin was born in Texas. Samuel was the son of Robert Daniel Wharton, who was born in Lancashire, England, and of Mary Jane Grigg. Idora was the daughter of Luther Daniel Gray and Lou Ann Lain.

Vince’s paternal grandmother was Katie/Kate Louella Carroll/Carol (the daughter of George Franklin Carroll and Hattie Pardin/Pardon). Katie was born in Mississippi. George was the son of Joel Green Carroll and Lydia Catherine Redus. Hattie was the daughter of Dallas L./M. Pardin and Mary E. Spuyer.

Vince’s maternal grandfather was John George Ortiz (the son of Felipe Ortiz and Virginia Howard). John was born in New Mexico, of three quarters Mexican descent. Felipe was the son of Ramon Ortiz, who was born in Nuevo México, Mexico, and of Rafaela Chavez. Virginia was the daughter of George H. Howard, who was born in Illinois, of British Isles descent, and of Pauline Apodaca.

Vince’s maternal grandmother was Clara B. Bourguignon (the daughter of Luis Bourguignon and Maria Manuela Gonzales). Clara was born in New Mexico, of three quarters Mexican descent. Luis was the son of Felipe Bourguignon, who was German, and of Maria Tomasa Gonzales. Vince’s great-grandmother Maria was the daughter of Jose Miguel Gonzales and Josefa Lujan.

Genealogy of Vince Neil (focusing on his father’s side) – http://www.geni.com