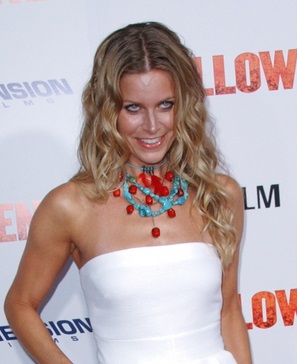 Moon Zombie in 2009, photo by Prphotos.com

Sheri Moon Zombie, previously credited as Sheri Moon, is an American actress, model, dancer, and fashion designer. She is married to musician and filmmaker Rob Zombie, and stars in his films, particularly House of 1000 Corpses, The Devil’s Rejects, and The Lords of Salem.

Sheri’s paternal grandfather was William A. Skurkis (the son of Anthony Skurkis and Petronella Balunis). William was born in Pennsylvania, to Lithuanian parents.

Sheri’s maternal grandfather was Leon C. Grabowski (the son of August Grabowski and Rose Lasecki/Losecki/Lasecky). Leon was born in Pennsylvania, to Polish parents. August was the son of John Grabowski and Caroline. Rose was the daughter of Ignacz Lasecki and Mary Szezak.