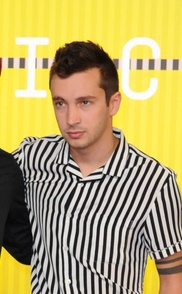 Tyler Joseph is an American singer, songwriter, rapper, multi-instrumentalist, and record producer. He is the lead vocalist and keyboardist for musical duo Twenty One Pilots, in which he works with Josh Dun.

Tyler is the son of Kelly and Christopher Joseph. He is married to Jenna Black, with whom he has two children.

Tyler’s paternal grandfather was Robert O. “Bobby” Joseph (the son of Tony Joseph and Catherine/Katherine Charlie/Calearly/Kaleel). Robert was born in Pennsylvania, to parents from Tripoli, Lebanon. Tony was the son of Marian.

Tyler’s paternal grandmother was Nancy Krnyaich (the daughter of Austin Krnyaich and Anna Uzelac). Nancy was born in Bellaire, Ohio, to Serbian emigrants from Yugoslavia. Anna was the daughter of Michael Uzelac and Helen Zmezic.