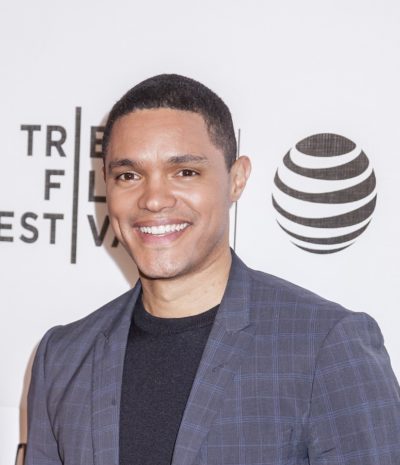 Noah in 2016, photo by vonora/Bigstock.com

Trevor Noah is a South African comedian, television and radio host, and actor. He has hosted The Daily Show with Trevor Noah since 2015.

His father is white, of Swiss-German descent. His mother is black, of Xhosa background. His parents’ relationship was illegal at the time of his birth. His mother was fined and jailed as a result.

Trevor is fluent in six languages, English, Afrikaans, and the indigenous African tongues, Zulu, Xhosa, Tswana, and Tsonga. He also speaks some German.

Trevor was raised Christian. However, when he was around 10 or 11, his mother converted to Judaism.

…I think when you look at religion, you look at where Christianity came from, you know, my mom delved deeper into that. And she felt a deep connection, and she wanted to go as deep as possible into… the world of religion. And that took her into Judaism… So then I lived my life as a – as a part-white, part-black but then sometimes-Jewish kid. And I didn’t understand ’cause she didn’t make me convert… like, for instance, when I turned 13, she threw me a bar mitzvah… but nobody came because nobody knew what… that was… So it’s just me and my mom. And she’s celebrating, and she’s reading things to me in Hebrew. I don’t know what’s going on. And she’s telling me that now I’m a man… I mean, I still live today with my mom sending me, you know, Hebrew Scriptures or, you know, phrases or celebrating… she’ll write me an email and it’ll be Shanah Tovah, and the next day it’ll be something else, baruch hashem adonai. And… I’m lost half of the time, but that was the world that I grew up in.

Genealogy of Trevor Noah (focusing on his mother’s side) – https://www.geni.com