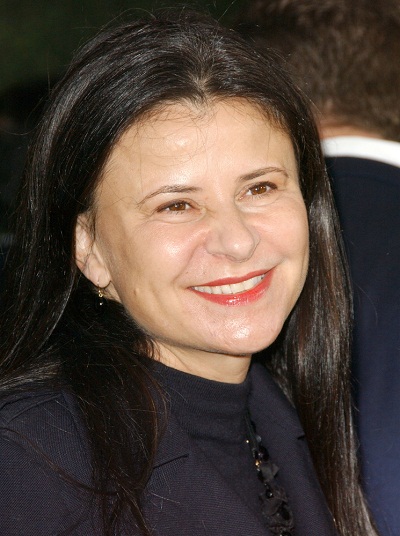 Tracey Ullman is a British and American actress, comedian, singer, dancer, director, writer, producer, and businessperson. Her roles include A Kick Up the Eighties, The Tracey Ullman Show, Tracey Takes On…, Into the Woods, Onward, and Mrs. America.

Her father, Antoni/Anthony John Ullman, was a Polish soldier who was evacuated to Dunkirk during World War II. Her mother, Doreen (Cleaver), was English, and also had Romanichal ancestry. She was married to producer Allan McKeown, until his death, with whom she has two children.

An Express.co.uk article stated that Tracey was often passed over for roles in school plays because her looks were too exotic.

Tracey’s maternal grandmother was Ellen Maude Penfold (the daughter of Thomas Penfold and Elizabeth Worster). Ellen was born in Woolwich, London, England. Thomas was the son of Thomas Penfold and Phoebe Simpson. Tracey’s great-great-grandfather Thomas was a wood chopping traveller. His surname is common among Romanichal travellers. Tracey’s great-grandmother Elizabeth was the daughter of Henry Worster and Elizabeth Brown.