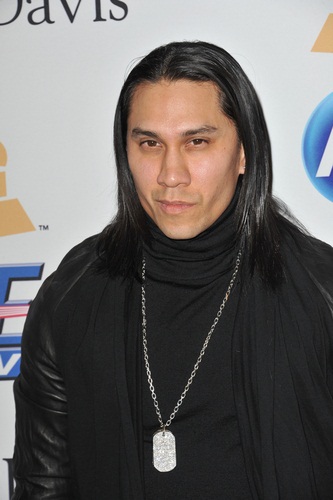 Taboo is an American rapper, singer, songwriter, actor, and DJ. He is a member of the music group The Black Eyed Peas. Other members of the group are apl.de.ap, Fergie, and will.i.am.

Taboo has said that he has some Shoshone Native American ancestry. The Shoshone tribe was originally located in the states Idaho, Utah, Wyoming, and Colorado.

Taboo is married to Jaymie Dizon. He has a son from a previous relationship; and two children with Jaymie.

Taboo’s maternal grandmother was Clarita Acosta (also known as Aurora Calistro Acosta, the daughter of Enrique Acosta and Augustina Calistro). Clarita was born in Arizona. Enrique was a Mexican immigrant. Augustina was the daughter of Mexican emigrants, Gabriel Calistro Reyes, of Arizpe, Sonora, and Felipa Salvatiera.

Source: Genealogy of Taboo (focusing on his mother’s side) – https://www.geni.com