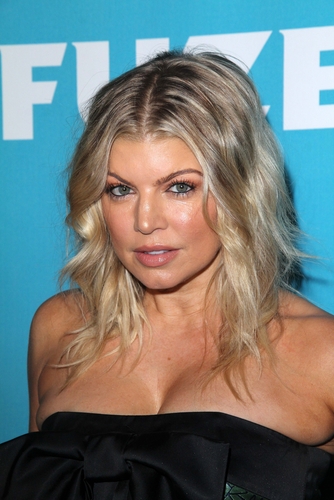 Stacy Ann Ferguson, better known simply as Fergie, is an American musician, actress, fashion designer, and television personality. She is a member of the music group The Black Eyed Peas, and has also worked as a solo artist. Other members of the group are apl.de.ap, Taboo, and will.i.am. Her film roles include Grind House: Planet Terror and Nine.

Fergie is the daughter of Theresa and John Patrick Ferguson. Her uncle, Tim Ferguson, is editor of Forbes Asia. Fergie has a son with her former husband, actor and model Josh Duhamel.

In 2008, Fergie stated that one of her father’s grandmothers was born in Guanajuato, Mexico. In 2015, she also said:

I’m very proud to be part Mexican. I’m one of a growing number of Hispanics in America, but you wouldn’t necessarily know it. This is becoming the norm, and it’s the beauty of our melting pot.

Fergie’s paternal grandfather was Harold Lee Ferguson (the son of Anthony Wayne Ferguson, Jr. and Jeanette/Jeannette/Janette Lewis “Jean”/”Nettie” Stone). Harold was born in Logan, Logan Co., West Virginia; his parents and all of his grandparents were also born in the state. Harold had English, as well as some Scottish and German, ancestry. Anthony was the son of Anthony Wayne Ferguson and Margaret Ferguson. Jeanette was the daughter of Robert Lee Stone and Margaret May Toney.

Fergie’s maternal grandfather was John Douglas Gore (the son of Arthur Henry Baldwin Gore and Margaret Jane Browne). John was born in California. Arthur was born in Bandon, Cork, Ireland, to an Irish-born father, Arthur Saunders Gore, and to an Australian mother, Elizabeth/Eliza Baldwin. Fergie’s great-grandfather Arthur was from an upper-class family of English and Northern Irish descent. Margaret was born in California, to an Irish-born father, John Douglas Browne, and to an Ohio-born mother, Julia M. Cowper/Couper, whose own parents were Irish.

Fergie’s maternal grandmother was Evelyn Mary Wagner (the daughter of Irvin Leo Wagner and Mary/Maria Elizabeth “Mamie” Gabel). Evelyn was born in California. Irvin was born in Ohio, to German parents, Francis G. Wagner, from Cassel, and Mary Elizabeth Liebel. Fergie’s great-grandmother Mary Elizabeth was born in Ohio. Her father, Peter Gabel, was the son of ethnic German parents, from Alsace-Lorraine. Her mother, Mary/Marie Elizabeth/Elisabeth Reineck, was the daughter of a German father, and of a mother, Suzanna “Susan” Bartson, who was from Hesse Castle, Luxemburg.

Genealogies of Fergie (focusing on her mother’s side) – http://worldconnect.rootsweb.ancestry.com
http://thepeerage.com